Industrial and occupational changes have been well-studied. These changes of work are embedded in wider changes of economies and societies due to globalisation and rapidly developing communication and information technologies. However, changes in work are not limited to how work is being performed but also where work is being performed. Recent research has stressed that work is not only more fragmented in terms of when tasks are performed but this task fragmentation also relates to an increased spatial fragmentation of work (Alexander et al., 2010). Similarly, it has been suggested that work has become less fixed in one workplace and that workers in post-industrial economies more often combine workplaces (Ojala and Pyöriä, 2017). Although cities are regarded as centres of creativity, innovation and progress, little is known how spatial transformations of work play out in cities and shape mobility patterns in contemporary cities.

Work by Darja Reuschke in collaboration with Brendan Burchell (University of Cambridge) and Mary Zhang (University of Bristol) sheds new light on the spatiotemporal patterns of work in European cities. Based on the 2015 European Working Conditions Survey, we have derived a new classification of workplace locations for full-time workers in European cities that takes, for the first time, account of the complexity of patterns in terms of both space andtime. Findings show that almost half of men’s working patterns and one-third of women’s working patterns classify as ‘atypical’ as the work is not fixed at the employer’s or business premises. Findings further reveal stark gender differences in these workplace patterns, in particular, women’s working patterns are more spatially fixed in one place. Gender segmentation in cities thus appear to be much larger when explored through our spatiotemporal workplace approach than existing literature on occupational gender segregation suggested.

Interestingly, we did not find gender differences in homeworking. Only working from home and in no other place represents a small minority of work in European cities. However, in combination with employer or business premises, it is the most significant pattern after only working at the employer’s or business premises. The study will be published in Urban Studies in due course. 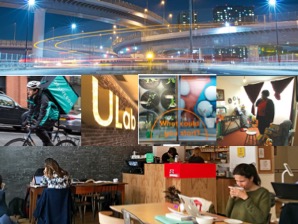 This is an interdisciplinary paper that investigates for the first time the spatiotemporal patterns of work in cities. A new classification is derived that relies on high quality European cross-sectional data using a rigorous methodology that combines the type of workplace people work at and the time they are performing work in these locations. This advances existing research on multilocational work that has little incorporated the time geography of work. The revealed patterns are investigated by gender and multivariate findings reveal a level of gender segregation in contemporary European cities that is much higher than expected from existing research on occupational gender segregation.