Existing urban economic research assumes that workers commute to a single fixed workplace. Self-employment has changed this pattern substantially. However, homeworking amongst the self-employed is diverse with only the minority actually working all the time in their home. A large proportion works at varying places alongside their home. This projects investigates both the self-employed or business owners who perform their work at home and those who mainly work outside of their home but have their home as base for their business.

We bring new light into contemporary workplaces and working practices using different methods. For example, we use geolocated tweets from freelancers to reveal the places where freelancers tweet from. We used a survey application to study the mobility of self-employed homeworkers over several days in comparison to employees with commutes. We also identified coworking groups who are organised in social media networks and studied where they meet – including in their own homes – and their temporal and spatial patterns of work.

Another key data source we use is Census of Population data for the UK 2011 and 2001 which allow us to investigate for small geographic units where home-based self-employment has increased and how this is connected with other area characteristics and change.

We have developed a tool that quickly shows for all small areas in England and Wales the proportion of workers who work mainly from home in 2001 and 2011.

This interactive map shows the portion of people working mainly from home in England and Wales in 2011. https://soton-uni.maps.arcgis.com/apps/webappviewer/index.html?id=f6e6f7d9fea24bf79ac06cfb1e3e4c3b 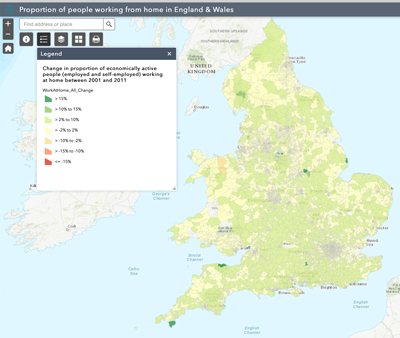 This interactive map shows the proportion of employed and self-employed people working mainly from home 2001 & 2011 and the change between the Census years  https://soton-uni.maps.arcgis.com/apps/Compare/index.html?appid=06d16060e0fe41a78e2a5bc76e327eff