Beginning October 2018, the WORKANDHOME team, with the help of outside consultants, embarked upon an ambitious mobile survey. Our objective was to use GPS location tracking to capture participant movement and a real-time survey questionnaire to ask questions about peoples’ activities and feelings throughout the day. Participants were instructed to use the mobile app for 7 consecutive days to enable us to capture routine daily movement and behavior. The mobile survey app was designed by tech company Wubbleyou (https://www.wubbleyou.co.uk/), while participant recruitment and compliance was administered by the well-known market research company BMG (https://www.bmgresearch.co.uk/).

Our project is focused on understanding new ways of working in the modern economy and thus we focused on three separate groups of the workforce for comparison – home-based self-employed workers, business owners with a separate premise, and traditional employees. Our study was administered in two different cities (Leeds and Brighton and Hove) which were chosen based on their geodemographic and workforce profiles. Specifically, we chose Leeds because it is a post-industrial northern city with average levels of home-based working and self-employment. We chose Brighton and Hove because it is a southern city, near London, with above average home-based working, and self-employment. We then aimed to recruit 450 participants from each city split across our three target workforce profiles. We also made sure that we had a roughly even split between men and women.

For each participant, what we get from the app is a GPS track of their movement. An example of my own movement track is given below to illustrate how detailed these data are. Specifically, we can identify the routes people use when travelling between places where they work, shop, recreate, and live. Using built-in features of the app we can distinguish between different travel modes (such as walking or in a vehicle). We can identify at which places people stop and for how long they stay there. In total, we have collected over 2 million GPS location points which we are using to understand participant movement and activity behaviour. 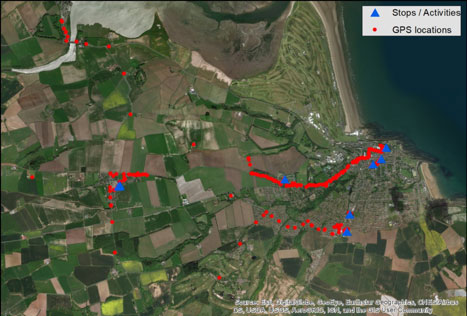 Finally, as part of the survey we asked people questions about their activities in real-time through the mobile app. Specifically, we asked people where they were, who they were with, what they were doing, and how the felt about the activity they were working on. We collected over 20 000 completed survey questions through the mobile app. These data can be used to compare how happy people were at different points during the day and to test hypotheses associated with different workforce profiles. These data are completely novel in the UK context, and we hope to be able to address important questions about new ways of working in the modern economy.

Dr Jed Long is an Assistant Professor in the Department of Geography at Western University in London, Ontario, Canada. Previously he was a Lecturer in GeoInformatics at the University of St Andrews in Scotland. His research is primarily focused on computational methods for analyzing spatial and temporal patterns of movement in human and wildlife GPS tracking data. He is a co-investigator on the WorkAndHome project.